“The effectual, fervent prayer of a righteous man availeth much,” James declared (5.6).  God is not interested in mindless chatter, religious repetition, or lazy meaningless liturgy.  What our Father really wants are people who pray passionately, thoughtfully, and expectantly.
Think of Abraham.  When God told him that Sodom was about to be destroyed, Abraham engaged in a passionate conversation with God.  “Will not the judge of all the earth do righteously?  Surely You’ll not destroy the city if there are fifty righteous people in the city,” he said.
And God said, “if there are fifty righteous people, I won’t.”
Abraham, came back and said, “If there are forty-five righteous people in the city, surely You’ll not destroy it, will You?”
“No,” said God.
“What about forty?” countered Abraham. “Thirty, twenty, ten?”
“Even if there are ten righteous men, I won’t destroy the city,” God replied.
What boldness and passion of Abraham to bargain with God.  There was dialogue and desperation, intensity and sincerity.  Abraham’s relationship with God wasn’t based on religion, morning devotions or a church service.  It was based on passion.  And as a result, God called him His friend (James 2:23).
I am reminded of Abraham’s grandson, Jacob.  In his own hour of need, Jacob grabbed God and said, “I’m not going to let You go until You bless me.”  And there they were, rolling in the dirt by the brook Jabok, wrestling all night long.  When morning broke, Jacob was broken as well.  But the Lord said, “You’ve prevailed.  And My blessing is upon you” (Genesis 32)
A lot of us have lost our passion with God.  Devotions have become drowsy, Prayer, if we bother, is routine and repetitious chatter.  But there is good news:  Jesus advocates for us daily before the Father, and his defense for us is the passion of the cross.  So, next time you’re in prayer, remember our father Abraham, or perhaps recall the struggle of Jacob, wrestling with God all night long, and remember, “The effectual, fervent prayer of a righteous man availeth much.”
Al Lippincott, Chaplain 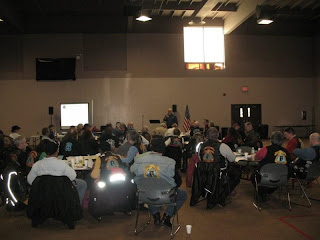 A few of us went to the Western WA Officer's Meeting. The meeting was well
attended overall. This was a great opportunity to get updated on the
operational side of CMA and network with other chapters. It's always
impressive to see the caliber of people that keep CMA running and Washington
clearly has a great team.

Please join Hap’s family and friends in a celebration of his life, 1 pm, Saturday March 1st 2008 at the Multnomah Holiness Camp 10801 SE Holgate Blvd, Portland Or. 97266 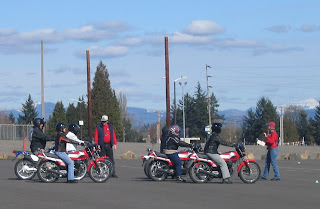 There are three of our own in this picture, getting
a little training. Can you spot them?
Why do I suspect there's a Ladies Only ride
somewhere in the not too distant future?

Make Sure You Have a Plan

Hi Everyone!
This is where we will be staying Friday night to go to the Officers meeting on Saturday. If you would like to go, make your reservations. Also if anyone wants to go up Saturday morning instead, please let me know and we can see about getting people to ride together.
We will be leaving Vancouver about 5:00PM on Friday.
Love & Blessings
Sheila
Search results are based on the following:

Hi Girls,
Just wanted to update you on the Girl's Night Out. I will have some Chonda Pierce tickets at the meeting Saturday. I don't have alot left so if you want one please be there with $18.00. If we need more I will order more, after I collect for these. I previously said the tickets were $16.00 but I didn't know they charged a SC on each ticket.
We hope you can join us! We plan to go to dinner at about 5:00 before the show. (place TBA)
Hope to see you at the meeting Saturday! If you can't be there, email me and we'll see what we can do about getting you a ticket.
Love & Blessings
Sheila

We meet the 3rd Saturday of each month.
The meetings are scheduled as follows:

We will meet at the Home Town Buffet located off
of SR 500 at 7809B NE Vancouver Plaza in Vancouver, WA
You'll find us in the conference room.

Getting the Most From This Web Site.....

As you look through the articles on this web site you will notice new features:
Other items carried over from the previous site:
.....and finally, there is a link to contact me via Email or Skype.

Let us lift your needs before the Lord! Our online prayer chain is here for you! Just email Chaplain Art at: chaplainan@aol.com

WIN A WASHINGTON - NO. IDAHO STATE RALLY PACKAGE FOR TWO OR FAMILY !

Registration - Camping - Pie Run - Ice Cream Social, the works
Open to Washington - No. Idaho members only
Yes, you can win it all.

HOW? By simply designing the graphics for the front of this year’s State Rally Commemorative t’shirt. Can’t draw, no problem. There are many software programs that can assist you! You can do it !

What NOT to include:

All entrants must be members of The Christian Motorcyclists Association. All designs must be on 8.5" X 11" white paper and submitted by April 15, 2008.

Please send your design to: 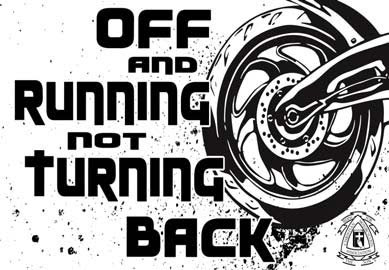 As times and technology keep changing so must we. Many of you have requested that we send you the Rep Report “electronically”. Well, we are pleased to announce that, that option is now available!  To receive your Rep Report “electronically” just “email” us your request and we will drop you right into our new data-base. We will accept only email requests.  Phone requests and/or hard copy letters not accepted.

Email your request to: cmarus@aol.com

1. Faith is the ability to not panic.
2. If you worry, you didn't pray. If you prayed, don't worry.
3. As a child of God, prayer is kinda like calling home every day.
4. Blessed are the flexible, for they shall not be bent out of shape.
5. When we get tangled up in our problems, be still. God wants us to be still so to untangle the knot.
6. Do the math. Count your blessings.
7 God wants spiritual fruit, not religious nuts.
8. Dear God: I have a problem. It's me.
9. Silence is often misinterpreted, but never misquoted.
10. Laugh every day -- it's like inner jogging.
11. The most important things in your home are the people.
12. Growing old is inevitable, growing up is optional.
13. There is no key to happiness. The door is always open. Come on in.
14. A grudge is a heavy thing to carry.
15. Those who dies with the most toys are still dead.
16. We do not remember days, but moments. Life moves too fast, so enjoy your precious moments.
17. Nothing is real to you until you experience it; otherwise it's just hearsay.
18. It's all right to sit on your pity pot every now and again. Just be sure to flush when you are done.
19 Surviving and living your life successfully requires courage. The goals and dreams you're seeking require courage and risk-taking. Learn from the turtle, it makes progress only when it sticks out its neck.
20. Be more concerned with your character than your reputation. Your character is what you really are, while your reputation is... merely what others think you are.

Hi Everyone,
Just a quick note to let you know that Conrad is trying to round up a few people to go to Wildhorse Canyon this weekend to the Younglife Camp for a work & fellowship time. He says they put you up in a Condo & feed you very well. He says it is awesome and if you go once, you will be hooked. You can call him at 687-5506. Check out their website @ wildhorse.younglife.org
Also our Officer's meeting is Tuesday at 7:00PM @ Pied Piper pizza in Orchards. All are welcome. Regular meeting Sat. 2-16 @ Hometown Buffet 8:30 Breakfast, meeting to follow.
Don't forget the girls night out Feb 29th. We will go to dinner and then go see Comedian Chonda Pierce at Crossroads Church. Debbie and I have tickets, ($16.00)so if you are interested please let us know and we will hold a ticket for you. We will have them at the Officers meeting Tuesday.

Check out the new and improved website @ http://ccc26.blogspot.com
See ya All Soon!
Love & Blessings
Sheila

WOW! It's been cold. The guys have rode the Bikes a couple times, but it's to cold for me.
We are planning a Girls night out on Feb 29th. I sent out an email and got a good response so we're going for it.
We will be going to see comedian Chonda Pierce, at Crossroads Church in Vancouver. We will go to dinner first ( To be announced ) We bought some group tickets so let us know if you want one and we'll make sure you get one. They are $16.00. You can contact me or Debbie. I will send out another email with further details.
The Easy Rider show went well. It was fun seeing all the Bikes and being able to minister and fellowship. Thanks to all who came out and helped.
Season's of Refreshing will be next month in Yakima and we hope some of you will try to go.
It is a time of teaching and fellowship with other CMA groups and getting refreshed to minister in the coming Season. If you plan to go you can get the registration online. Carl & I will be going. You will need to reserve a room or take a camper.
We need donations for our "Run for the Son" fundraiser that we do at our meeting. If you have anything to donate. Bring it to the meeting. We will also need to start collecting items for our Goody Bags that we give away at our events.
Our Son Gary, who is a CMA member will be getting married to Tami Jones June 7th at Faith Center Church @2:00, so mark your calendars.
We hope to see you all soon.
2 Tim 2:15 Study to Shew thyself approved unto God, a workman that needeth not to be ashamed rightly dividing the word of truth.
Love & Blessings
Sheila

Easy Riders Bike Show was huge success. We had a good turn out of members. I think the King Ambassadors were glad we came. We received a thank you from them. The ride to Springfield for the All Christian Biker gathering was very cold and a little wet on the way home. There was a good turn out of all the Christian groups. The Gypsy Jokers came also. I wish they could have talked and expressed there views but they were not allowed to. I think we need to minister to them when ever we get a chance. Praise God.
Season of Refreshing is coming up in March at Yakima. So plan to attend. I will have dates and time at the meeting. I like going to Seasons so I can be ready for the coming ministering season. and our state Coordinator ( Ralph ) always has good words for us. You also get a chance to meet Joe Maxwell are regional Rep. and all the other CMA members from around the state.

That's about it for this month.
Your Servant,

Run for the Son Partners